The feisty Bull Terrier, often described as clownish and mischievous, can be a fantastic family companion if given lots of exercises and mental stimulation. The Bull Terrier's egg-shaped head is probably the breed's most distinguishing characteristic, and its odd appearance has earned the breed's top-dog position in movies and advertising. Despite being loving and cuddly, the Bull Terrier can be tenacious and is notorious for pushing limits and breaking the rules. Although consistent training can aid in developing a well-behaved companion, owners must have a sense of humor to appreciate this amusing breed truly. The English Bull Terrier, White Cavalier, and Bully are all names for the Bull Terrier. 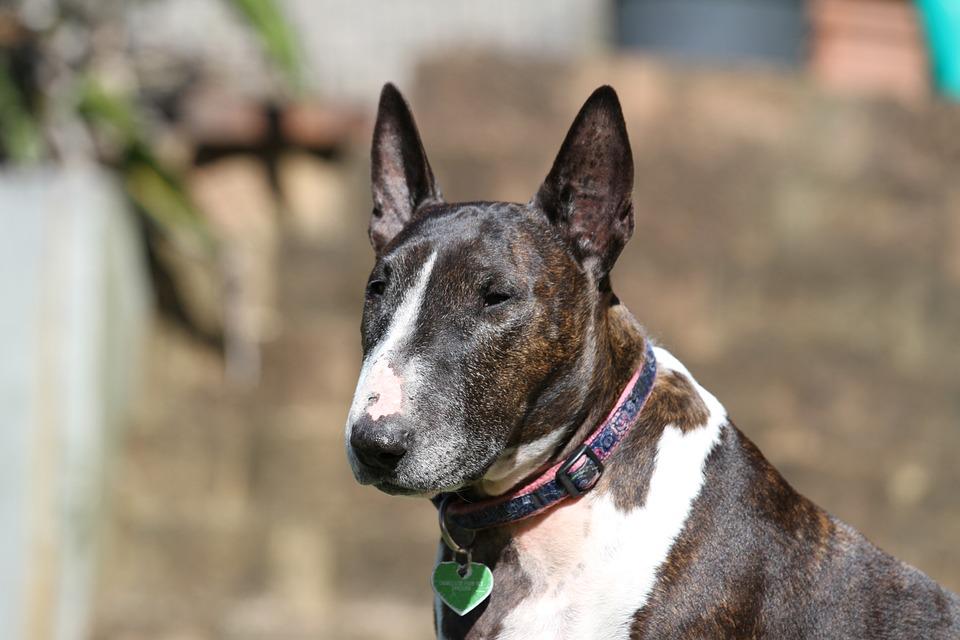 The bull terrier is an English medium-sized terrier dog breed with a short, smooth coat and a distinctive "egg-shaped" skull. The Bull Terrier has a strong, muscular, and large-boned build. It moves lively and cheerfully, implying power, skill, and agility. Its long head, which is formed like an egg and is somewhat flat on top, is a characteristic of the breed. It has a long, athletic, and arched neck. It has small, upright, pointed ears.

Its eyes are tiny, dark, close-set, triangular, set high on the skull, and gleam with intelligence, drive, and good humor. It has a black nose that dips down to the tip. Its short tail is thick towards the body and thins off as it approaches the end.

The Bull Terrier's coat is short and flat, with a fine, lustrous sheen yet is harsh to the touch. Its coat offers little protection from the cold and is better suited to warm climates. It might have a white or colorful coat. The dog's coat can be either solid white or white with colored markings on the head. Fawn, red, brindle (tiger-striped pattern), or tri-colored coats — solid or with white markings – are all options.

The Bull Terrier is exuberant, funny, playful, forceful, and mischievous. This sweet-natured, friendly, and faithful breed should be introduced to other dogs and small animals with caution. Compulsive habits such as tail-chasing and dot staring are common in them.

The Bull Terrier is always up for a good time and delighted to see you. It's not typical for a Bull Terrier to be frightened and back away from strangers.

They do, however, have a pleasant nature when it comes to people. They can be chewers, barkers, and tail chasers, and they're notoriously tough to house train. And If the Bull Terrier is allowed to become possessive or jealous, they can become unpleasant. They can be hostile toward other animals if they do not receive early training and socialization, such as exposure to dogs and other animals. 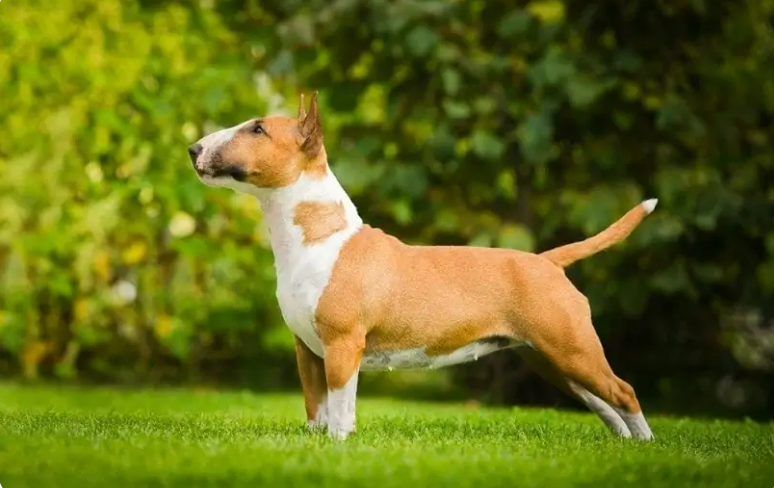 Plan to spend a lot of time with your bull terrier if you get one. They are incredibly active dogs who require constant companionship. Leaving a bull terrier alone is a recipe for disaster since he is prone to separation anxiety, leading to unwanted behaviors.

Because they were bred for both sport and companionship, it's ideal for taking your bull terriers on a daily 30–60-minute-long walk. Their strength and dexterity mean they are also skilled at obedience training, tracking, and agility courses, which are great ways to challenge their energy. But go easy with puppies who are especially bouncy; high-impact activities such as jumping on furniture, long jogs, or playing Frisbee can damage their developing joints. They need to exercise their minds and bodies and love the challenge of interactive toys.

One thing to keep in mind concerning bull terriers is that they will eat almost anything. It would be best to protect him from eating things he shouldn't and avoid emergency veterinary surgery; your home should be Bull Terrier-proof.

Because these boisterous dogs can be rough around the house, introducing a Bull Terrier to a family with youngsters should be carefully considered.

Bull Terriers fare best as only pets, but they can also get along with other dogs if introduced early in their lives. They have a strong prey drive, which means they enjoy chasing and catching small animals. If they are socialized with cats from an early age, they can be good with them. 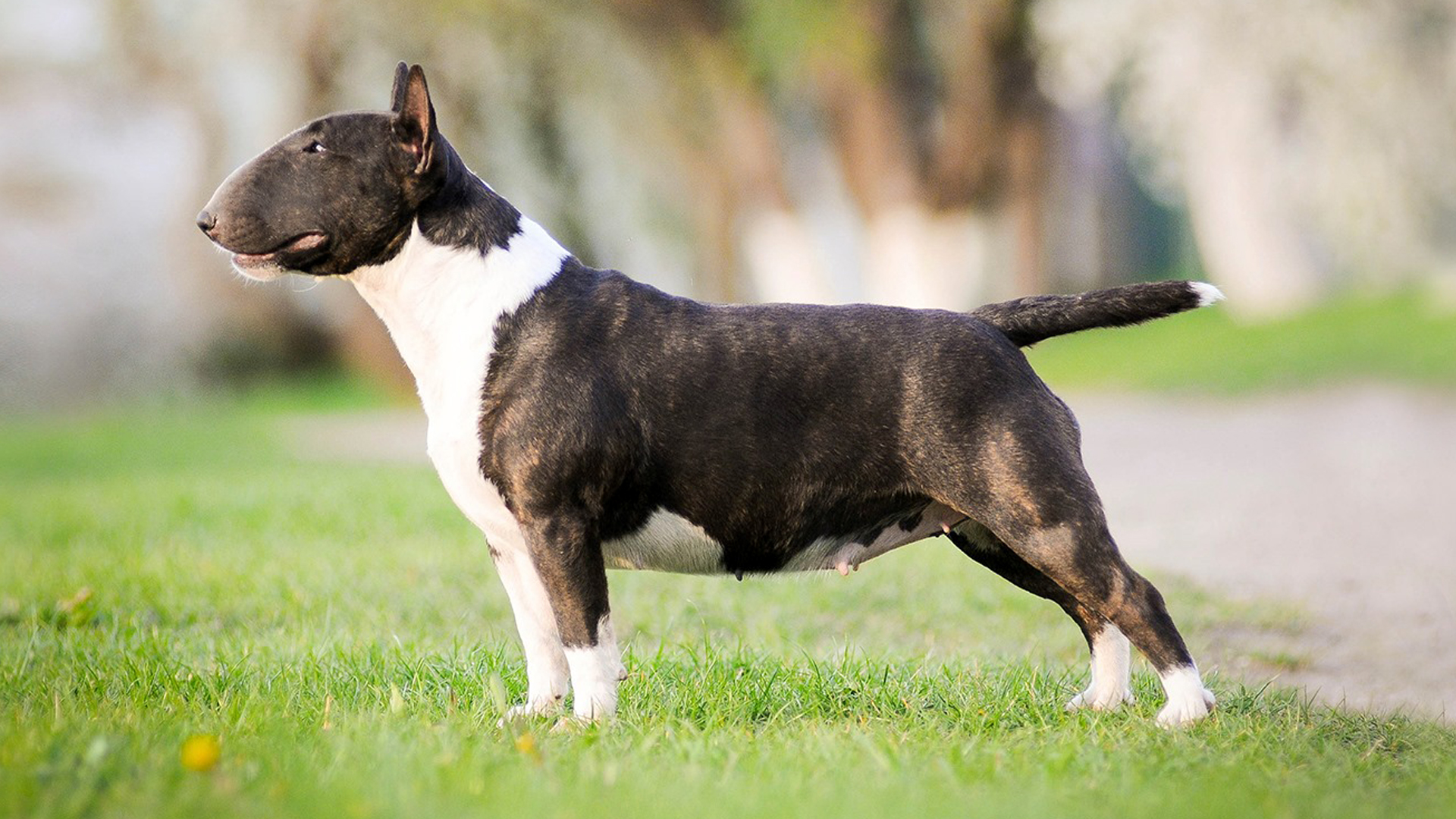 The Bull Terrier's incredibly short, silky coat requires little grooming. Only the most minimal grooming is required. Brushing with a soft-bristle brush or grooming mitt once a week will help to remove loose fur and distribute skin oils. Your dog may shed more frequently during certain seasons, such as the spring and fall, and you'll have to brush more frequently to keep up with the loose fur.

Bathe your dog once or twice a month, depending on how dirty it becomes. Also, check its nails monthly to see if they need to be trimmed. Check for wax buildup, dirt, and irritation in its ears at least once a week. And aim to brush its teeth every day.

Keep in mind that their coat won't keep them warm in the winter, but they won't mind putting on a cute sweater or coat when the weather gets a little cool. Warmer weather will make them more comfortable but never keep them outside unattended for long periods. Bull terriers, like other dogs, do not sweat like people do and require plenty of water, shade, and air conditioning to stay cool.

Patellar luxation affects the Bull Terrier, which has an average lifespan of 11 to 14 years. It's also prone to minor health problems, including heart problems, allergies, compulsive behavior, and more serious kidney failure and hearing problems.

Due to a genetic link, many bull terriers are entirely white, making them susceptible to hearing and blindness. It is advised that you have their joints examined for problems. This will give you an idea of what you might face in your later years, such as arthritis. 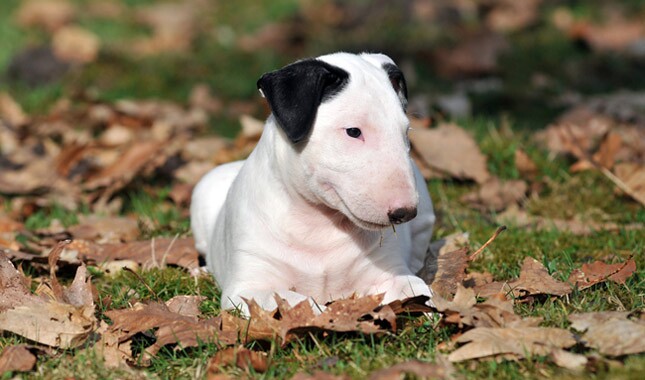 The Bull Terrier was created in 1835 when a Bulldog and an old English Terrier were crossed. Later crosses to the Spanish Pointer added additional size, resulting in a stubborn, robust, yet agile dog.

Around 1860, James Hinks crossed the Bull Terrier with the White English Terrier and the Dalmatian to create Bull Terriers, an all-white breed. The public's attention was immediately drawn to the new all-white breed, which quickly became a fashionable companion for young males who wanted a good-looking masculine dog by their side. The dogs were dubbed "the white cavalier" because they were known for defending themselves without initiating a fight.

The Bull Terrier's unique head evolved as the canines got more streamlined. Mixes with Staffordshire Bull Terriers returned color to the breed around 1900. This combination was initially unpopular, but in 1936 it was given equal recognition as a separate AKC variety. In 1992, the small bull terrier was recognized as a distinct breed.

The white Bull Terrier has long been the most popular variant as a pet and a show dog. Bull Terriers are regularly featured in marketing campaigns and films due to their amusing appearance and demeanor.

The Bull Terrier is a fascinating and friendly dog who only wants to be around people. They wish to share their abundance of love. Unfortunately, many individuals still associate this breed with fighting and aggression. The truth is that they are unaware of their strength, which might lead to misfortune. Whatever the case may be, the Bull Terrier is a caring friend who is loyal and loving. You'll never have to question whether your dog wants to be by your side with this breed.