Australian shepherds are clever, loyal, adventure-time dogs who enjoy spending time with their owners and discovering new locations. They are friendly and have lots of energy; therefore, they need daily exercise. They're known as "Velcro Dogs" because of their penchant for keeping close to their favorite person. They crave a lot of attention and despise being alone for lengthy periods. The obedient Aussie enjoys problem-solving and will find tasks around the house to complete, such as herding youngsters or other pets. They are always attentive and may reply to visitors with an alarm bark, but they are normally friendly with new people—though reticent. Overall, Australians are bright dogs who respond well to training. 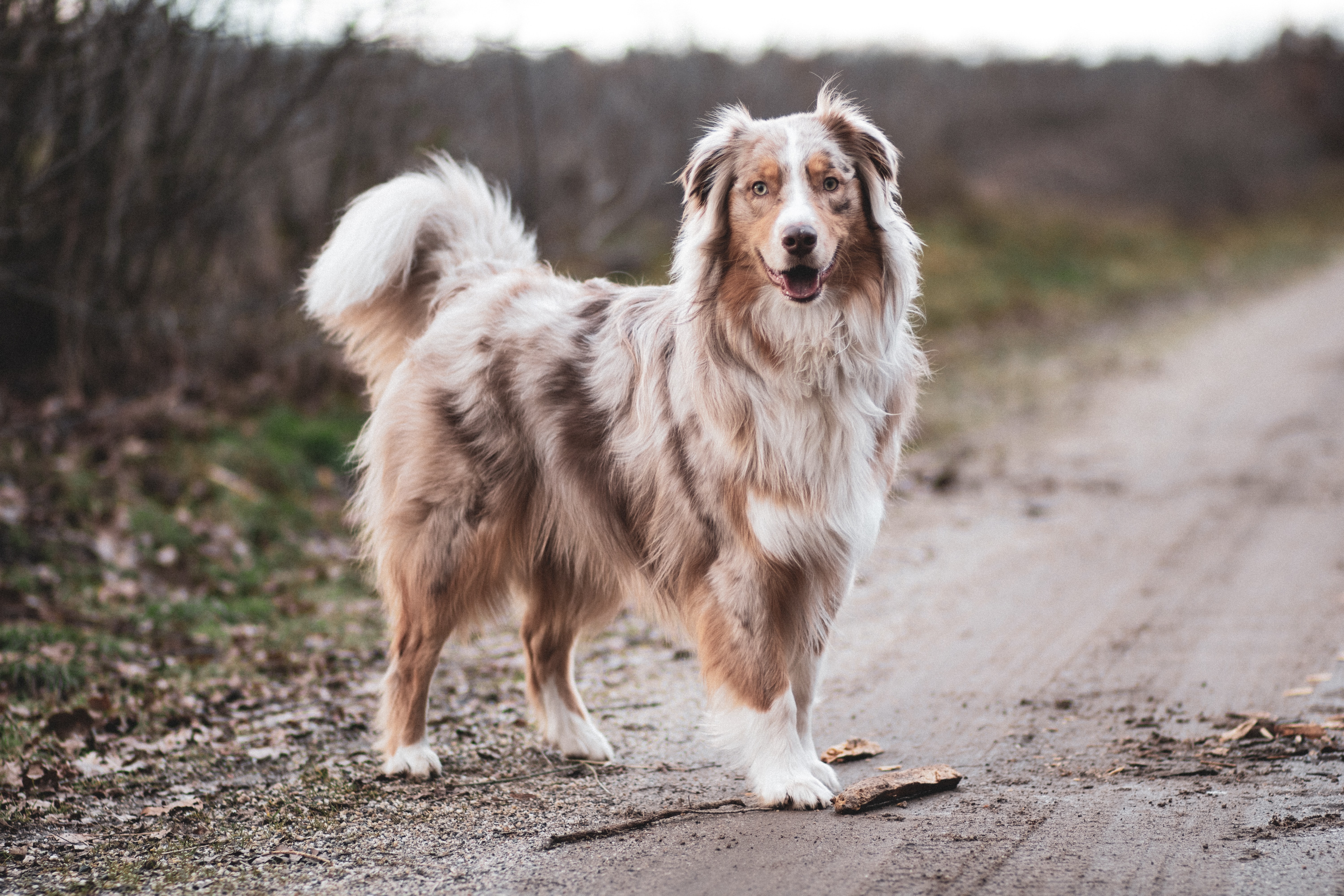 The Australian Shepherd is a medium-sized dog breed. They stand between 18 and 23 inches tall and weigh between 40 and 65 pounds. Male dogs are on the larger side of the scale regarding height and weight compared to female dogs. They are slightly taller than they are long. However, they are still athletic dogs with well-proportioned bodies behind their fluffy coats. Their body is built for rigorous work and is lean and robust.

Their tails are always four inches or less long, and they are either docked or naturally bobbed. Their ears are high on their skulls, and his triangle-shaped drop-down ears descend just below their eyes. They always smile when they meet their family after being away for a few hours.

Their almond-shaped eyes have a wary but welcoming expression. Their eyes can be marbled or flecked in pattern and blue, brown, or amber. Only a few dog breeds can inherit the heterochromia gene, which causes them to have multi-colored eyes. Different color eyes are seen to be attractive. They can command a premium price because of the increased demand for these puppies and their rarity.

Only a few color combinations of the coat are considered breed standard. The breed standard recognizes black, blue merle, red, and red merle. Tan points, white markings, or both, can be noticed throughout the coat. Black noses and other traits, such as eye and lip rims, are common in dogs. However, some people will have brown features. Merle-colored puppies may have pink dots on their noses.

The Australian Shepherd is a smart, laid-back dog breed that thrives on pleasing its owners. These canines get along with just about everyone, but they're focused and serious when they're on the job. These dogs are entertaining to watch whether they are herding sheep, hunting, displaying, participating in agility, or simply playing.

Owners should not be startled if their dogs bark and alert everyone when someone enters their property, even if the visitors have been there before. Their innate herding instincts may leak into the family as they strive to keep other animals in the house in control. However, they are not aggressive dogs and get along well with most other animals.

Australian Shepherds make wonderful family dogs. They enjoy playing with kids and would defend them at all costs. They are devoted to their masters and will guard them as if they were children. Because these dogs have a lot of drive and energy, they need regular exercise in walks, hikes, and playing in the park or yard, most likely provided by families with children.

Like most herding breeds, the Australian Shepherd has a protective instinct and may be wary of strangers. He is not a buddy-buddy dog with everyone he meets despite extensive socialization. The Aussie might become shy or aggressive in the face of strangers if he is not socialized early and often. Australians are also extremely sensitive to sound, and if they are not used to loud or unexpected noises, they may acquire noise phobias, particularly when it comes to thunderstorms. On the bright side, they are wonderful watchdogs that will always warn you if anything or anyone is out of the ordinary. 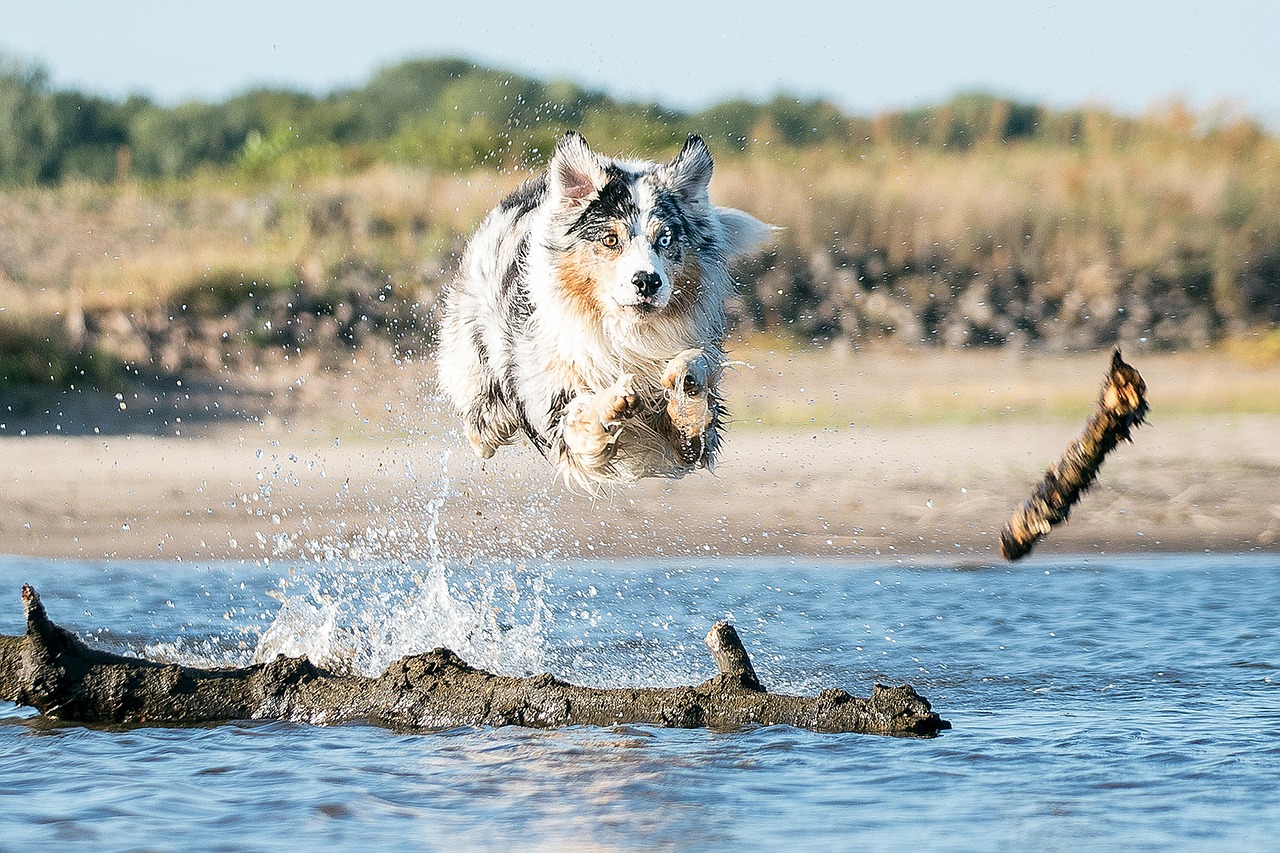 Even though these classic livestock dogs have adapted to modern living settings, they still require a good outdoor area to be adequately exercised. You don't need an area to keep an Aussie happy—though one could be ideal for this energetic breed! It will be sufficient to have a house with a spacious, fenced-in yard. Due to their activity requirements, Aussies aren't ideal for apartment living unless you can get outside and provide them with at least one to two hours of pretty strenuous activity each day, such as running, fetching, or agility training.

An Australian shepherd is a highly energetic, intelligent, and tough dog that requires a lot of exercises and mental stimulation. You must be willing to participate in obedience competitions, agility, flyball, or any other activity that mentally and physically stimulates the dog.

Aussies are quick to learn and appreciate regular training sessions because they are eager to please. They respond well to positive-reinforcement training, and once they've mastered the basics of obedience, many Aussies excel in agility training. While the average owner is unlikely to use this dog to herd cattle on the farm, many properly trained Aussies serve as search-and-rescue, narcotic detection, and guide dog.

Aussies, commonly known as "Velcro Dogs," want to spend most of their days with their owners and may not be the greatest option for someone who works long hours due to probable separation anxiety. Aussies are ideal for active owners who want to spend quality time with their dog, whether on a multi-day outdoor trip or doing errands together. Before committing to any dog, think about your lifestyle and talk to an Australian shepherd breeder or rescue group about your expectations to determine whether an Australian shepherd puppy or dog would suit you. 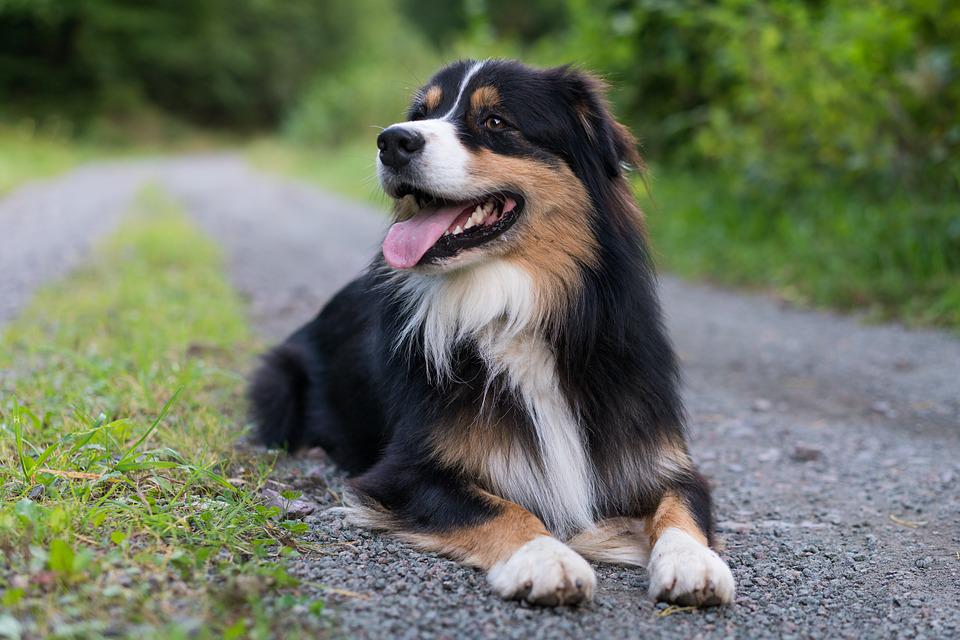 Their grooming procedure is surprisingly less time-consuming than you may expect. Their soft coat does not cling to dirt; thus, they are rarely dirty compared to other dogs. This breed only requires weekly brushing to eliminate dead hair to keep its appearance tidy. If your dog spends the day on a dusty ranch, you may need to brush them more.

Throughout the year, Australians shed moderately but profusely during the shedding season. A pin or slicker brush will be great for addressing their coats throughout the year. Brush them multiple times a week during shedding seasons if you want to keep shedding to a minimum. To keep their fur down, it is recommended to use an undercoat rake.

When they become extremely dirty, they should be bathed regularly. It would help if you only washed them once every four weeks to avoid stripping their coats off their natural oils. Dry puppy shampoo or wipes are useful when they get stinky on the ranch to avoid overbathing.

To avoid bacteria buildup, clean your ears and teeth once a week. In addition, infections and periodontal disorders are reduced. Because of the quantity of exercise they get, their nails will rarely need to be trimmed. They should be clipped if you can hear them tip-toeing on the floor. When brushing them, give special attention to their eyes. Pay extra attention to their eyes when brushing them. It could indicate one of the eyes mentioned above disorders if you notice any redness or irritation, dryness, or excessive tears.

With a dog as lively and intelligent as an Aussie, it's just as crucial to meet your dog's mental and physical demands. To avoid boredom, Australians require a lot of mental activity.

The Australian Shepherd is a typically healthy breed with a lifespan of 12 to 15 years, while certain abnormalities such as elbow and hip dysplasia and genetic eye problems can develop. According to the United States Australian Shepherd Association, breeders should test for cataracts, autoimmune thyroiditis, drug sensitivities, and collie eye anomaly (CEA) to avoid passing these diseases on to their litters. Experts suggest that dogs with close ancestors who have had hereditary cancer, such as lymphoma, should not be bred with dogs with the same condition. Of course, not all Aussies will have major health problems, but it's vital to be aware of these dangers if you're thinking about getting one.

While unusual, Australian Shepherds with double merle traits (i.e., a primarily white coat) may be more susceptible to hearing and vision problems. Despite this, these Australians can live long and healthy lives with adequate care. Before choosing a puppy from a litter, question your reputable breeder about any potential genetic issues and any family and pedigree history to spot any inherited red flags. If you're adopting an Aussie, ask the rescue group for any medical information they have. 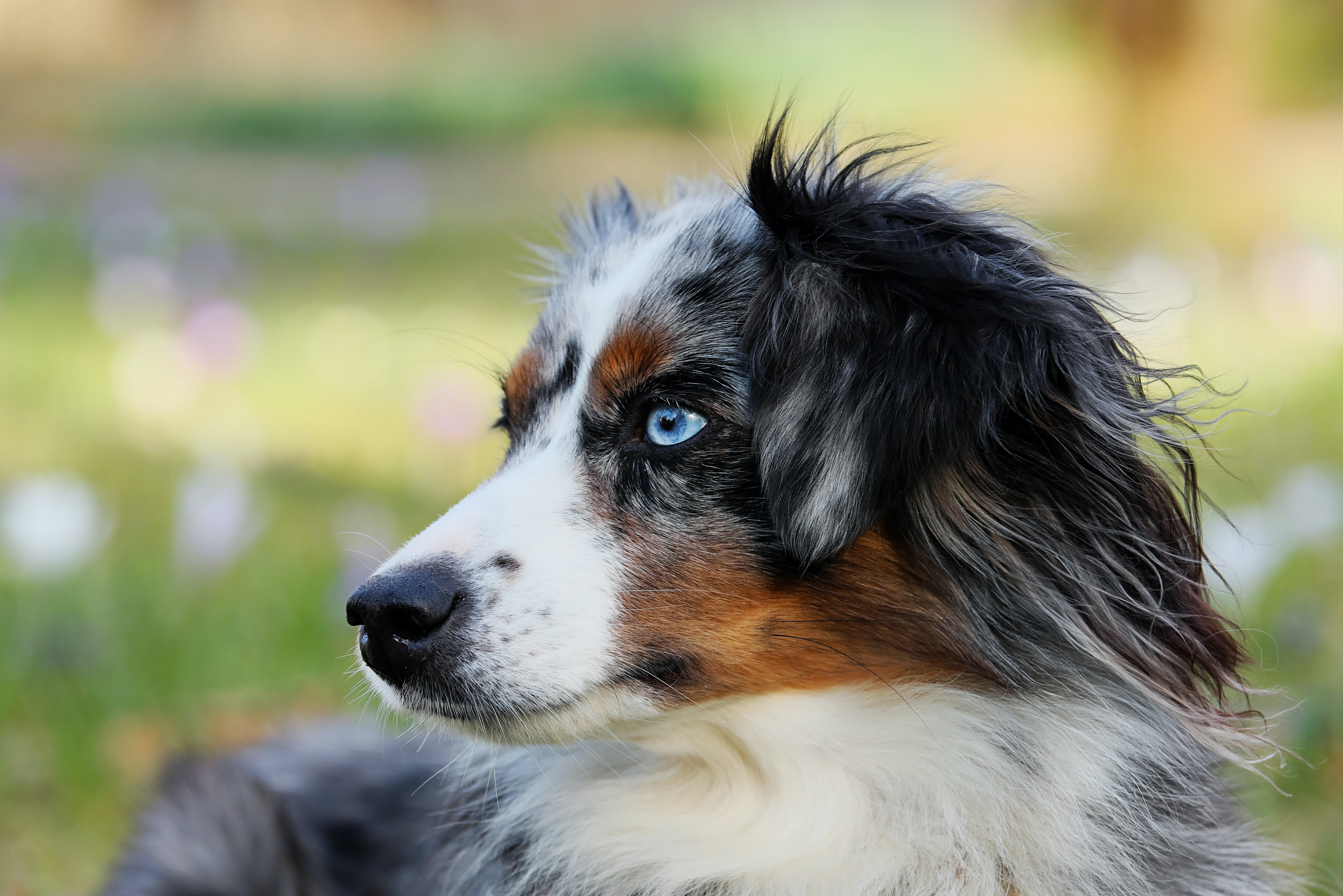 The Australian Shepherd is believed to come from Australia, a common misconception concerning their history. The story of the Australian begins, believe it or not, in the Basque region of Spain, near the Pyrenees mountains that separate Spain and France. Beloved Aussie's forebears were bred for their herding ability there. One popular hypothesis of the breed's origins dates back to the 1800s when European Basques arrived in Australia with sheep and sheepdogs. Many of these shepherds relocated to the western United States shortly after with their dogs and sheep. These dogs were naturally dubbed Australian Shepherds by American shepherds due to their former residency in Australia.

The severe terrain of Australia and western America put demands on herding dogs that they had not met in Europe. Still, the Basque dog quickly adapted and succeeded in these harsh conditions thanks to diverse crossings and rigorous selection for working aptitude. The breed had a low status until the 1950s when they were used in a well-known trick-dog act performed in rodeos and filmed. Many of these dogs, owned by Jay Sisler, can still be found in Australian pedigrees today.

The National Stock Dog Registry was the first to register an Aussie, now known as the International English Shepherd Registry. In 1993, the Australian Shepherd was recognized by the American Kennel Club (AKC). Because a significant portion of this working breed remains unregistered with the AKC, its popularity is understated according to AKC data. This breed excels in conformation, obedience, herding, and agility competition, making it one of the most adaptable breeds. The Australian sheepdog is equally capable of working cattle; some say its tight working style is more suited to cattle than sheep.

These boisterous dogs are wonderful family pets. They are hardworking pets due to their seemingly limitless energy and superior intelligence. When he's with his family, the Australian Shepherd is at his happiest, and he knows how to express himself when the job is done. He may be a nightmare if he doesn't have it. However, if you can supply him with this, you can be assured that this wonderful dog breed will become your greatest friend.