More than just a pretty face, the Affenpinscher is a very intelligent dog. In France, he's known as the mustachioed little devil, and he has a bold demeanor that makes him a favorite among individuals looking for a small dog with a "big dog" temperament. He comes from a lineage of terriers and began his career as a ratter in Germany. Affenpinschers are smart, active dogs with distinct faces that you won't soon forget. They enjoy mingling and acquiring new abilities, but only on their terms at times. 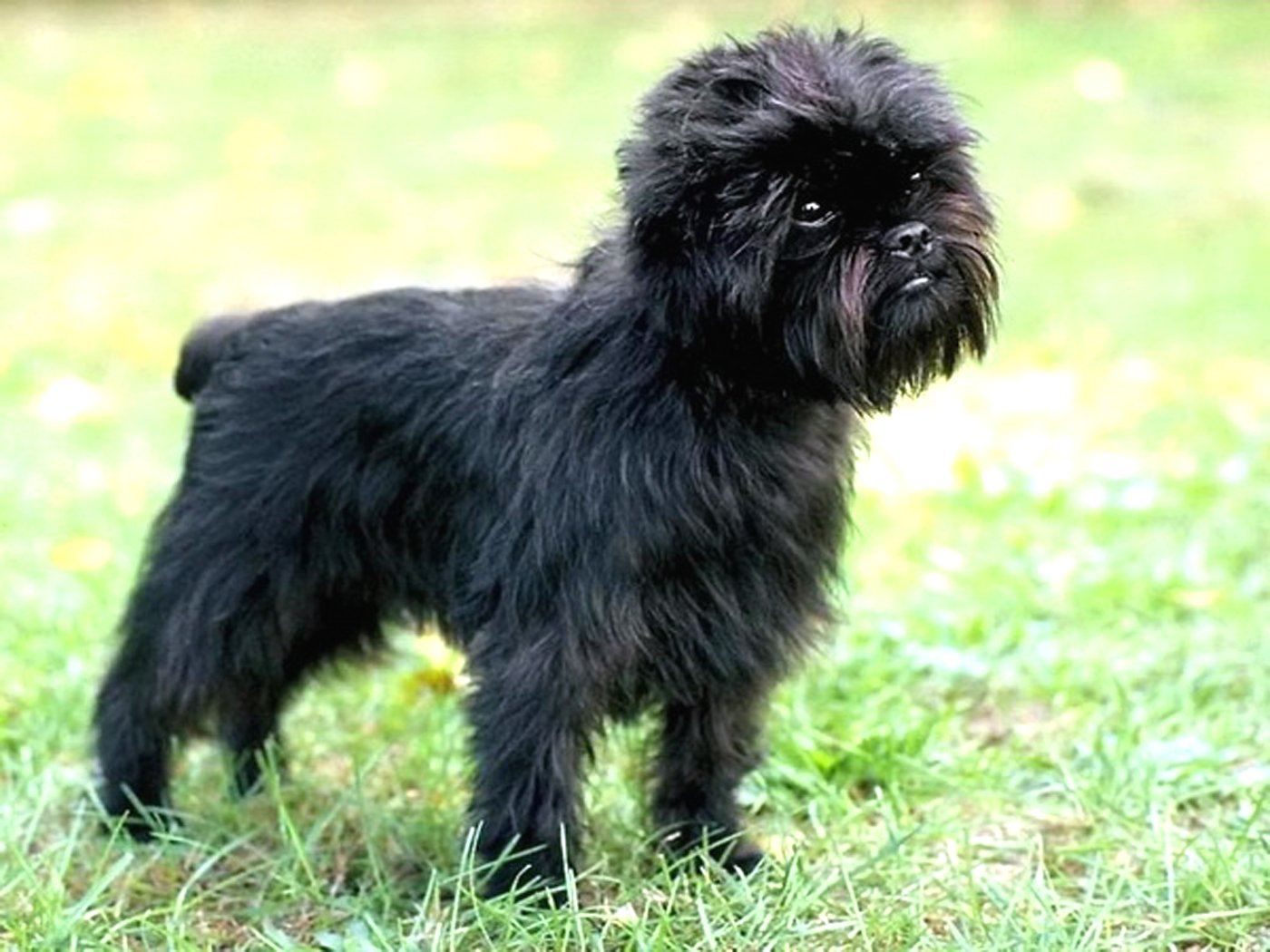 Affenpinschers are small dogs that stand under one foot tall and weigh less than ten pounds. They are little dogs with wiry, shaggy coats. Their face has longer hair than the rest of the body, giving it a distinct appearance. It's a smaller version of a working terrier who isn't particularly delicate. It has a square body with a deep chest that is relatively broad. The head is spherical, with a prominent stop transitioning between the back skull and the muzzle. The lower jaw is undershot and large enough for the dog's lower teeth to be straight and even as they protrude below his short nose. The black eyes are prominent and round. The limbs are straight and well-boned, while the neck is small and arched. The tail is docked to two-thirds of its length and carried high. The hairy ears are usually docked, pointed, and upright, but docking of animal tails and ears is prohibited in some nations. The coat is normally black or dark gray, but lighter gray, silver, crimson, black, and tan are options. The undercoat has a slightly curled texture.

The Affenpinscher is affectionate while being independent, sweet while remaining sensitive, and charming while remaining naughty. They are dogs who may make you laugh one minute and then frustrate the next, but their cute, bearded faces will always win out. They are usually calm dog breeds, yet they can become fascinated and agitated at any time, displaying a great passion and lust for life.

The most striking personality trait of these dogs is their extraordinary fearlessness. When it comes to protecting their family, most little dogs have an uncanny lack of size awareness, but the Affenpinscher goes further. These brave dogs will most certainly take on a bear if the circumstance demands it! When this fearlessness is combined with outstanding agility and dexterity, you'll be astounded at how well this tiny dog can control themselves in sports and activities. 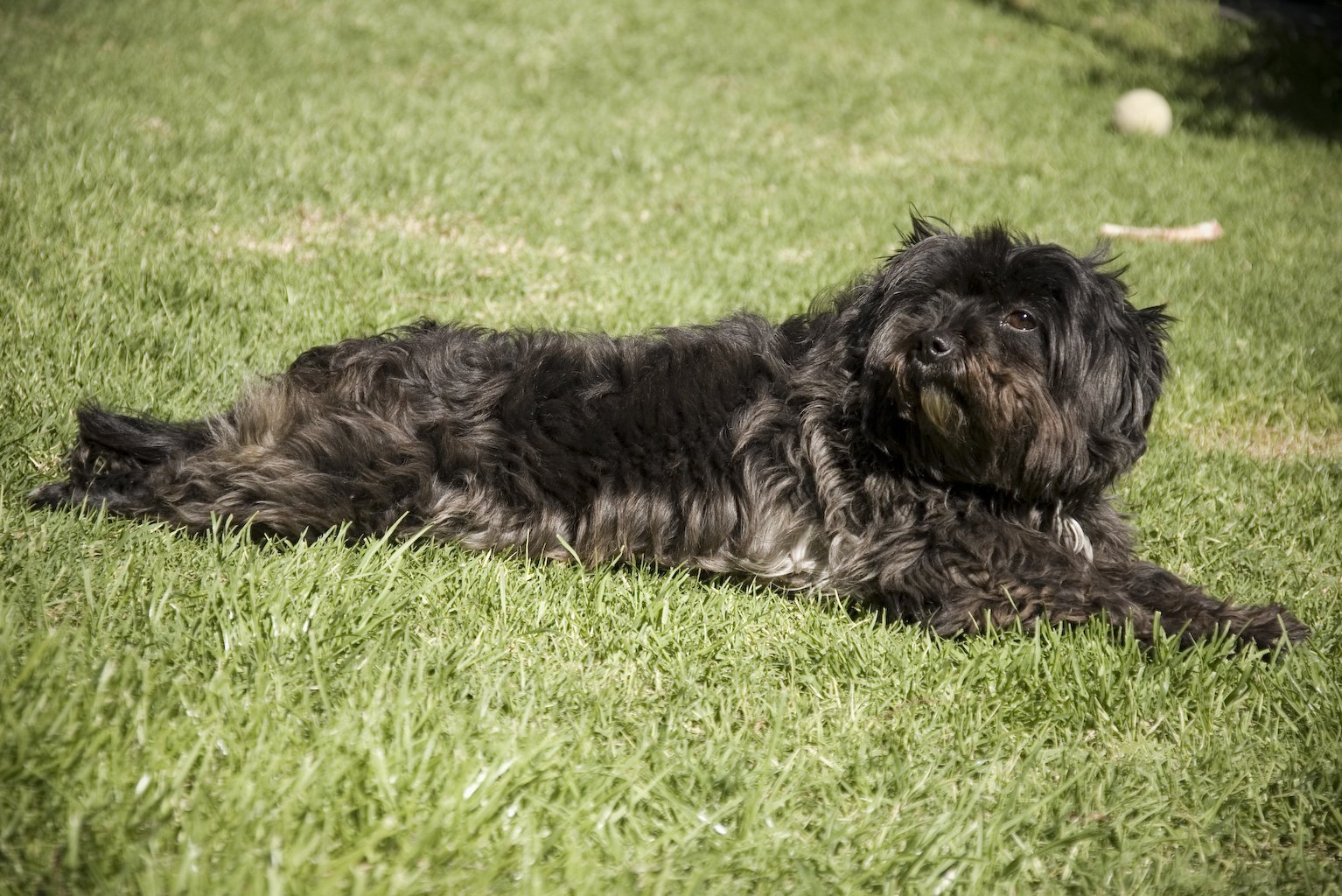 Because the Affenpinscher is a happy medium between lap dog and sporty puppy, they're suitable for both apartments and homes with fenced-in yards. They'll find methods to stay active indoors, but daily walks for exercise, entertainment, and social stimulation are required. Doupe recommends being mindful of your surroundings and keeping an eye out for predators; remember, these are little creatures.

Though their independence may make them unsuitable for tiny children, well-behaved or older children who can respect the Affenpinscher's boundaries can find a devoted companion. Affenpinschers get along well with other dogs in the house, particularly if they were raised together.

Though they get along with other dogs, Affenpinschers might lose sight of their small size and try to dominate large dog breeds. This is due to their relatively high prey drive, which arose millennia ago when raised as ratters. As a result, Affenpinschers may not get along with cats and certainly not with rodent pets like hamsters and gerbils. As with all dogs, socialize your affenpinscher puppy as soon as possible so that they can survive in a variety of surroundings.

Affenpinschers may require assistance climbing stairs and get on and off furniture due to their small size. They adore being with their families and will seek you and your lap, so getting some doggy steps so they can climb up to you on the couch could be a nice idea. 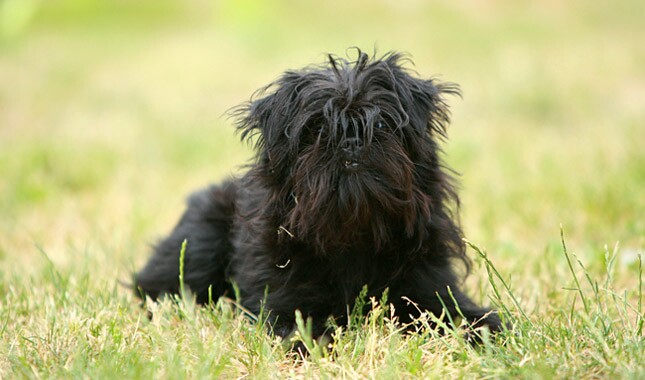 The Affenpinscher makes a great apartment dog, especially if your neighbors don't mind the occasional barking. Short, brisk walks or considerable time in the backyard will suffice for this sturdy but moderately energetic dog.

The Affenpinscher should be a full-time house dog with only supervised access to a fully enclosed backyard due to his small size. These dogs will not hesitate to confront animals considerably larger than themselves, leading to a deadly encounter.

Like many other toy breeds, the Affenpinscher can be difficult to house train. In your approach, be patient and consistent. Teaching your dog in a crate is recommended.

The secret to successful Affenpinscher training is to make it pleasurable. Make use of a lot of motivation and praise!

It's simple to groom an Affenpinscher. These dogs have a wiry coat that doesn't knot or matt readily, and they don't shed much. Brushing them should still be done regularly; it is generally plenty once or twice a week. Their long beards and facial hair might get in the way of their vision and make a mess when eating and drinking, so maintain this region shortly and trim. However, because their coat develops slowly, this will only need to be done every few months.

To avoid plaque build-up and tooth damage, you'll need to regularly keep their nails trimmed and brush their teeth. Bathe them only when necessary. Bathing them too often might deplete their coat's natural oils, leading to skin problems later.

Affenpinschers are generally healthy dogs with little inherited health disorders, although they are nevertheless susceptible to general health difficulties, as do all breeds. Of course, not all Affenpinschers will get these diseases; others may live long, full lives free of illness — but it's still crucial to be aware of them.

Patellar luxation is a condition in which the patellar cartilage is damaged in which the patella bone is misaligned, resulting in limb lameness in tiny dog breeds. Future concerns, such as arthritis, may arise, necessitating careful management or surgery.

Legg-Perthes disease is an ailment that is a deformity of the hip joint ball that arises between 6 and 9 months and might be misinterpreted as hip dysplasia. Abrasions and arthritis are the results. It can be surgically repaired, and the prognosis is good with rehabilitative therapy.

Hip Dysplasia is a condition that affects the hip joint. Hip dysplasia is a hereditary disorder of the hip joint that causes pain or lameness in the leg. It is more common in large breeds. Although careful screening normally prevents dogs with this illness from being bred, it can still happen because environmental conditions, such as rapid weight increase, might induce it.

Affenpinschers can develop vision disorders such as glaucoma (pressure that affects the optic nerve over time) and cataracts (gradual clouding of vision). Progressive Retinal Atrophy (PRA), a genetic eye condition, is more common in Affenpinschers than in other dogs. Affenpinscher puppies should be tested for PRA by their breeders. If you suspect your puppy or adult dog is suffering from a new eye problem, consult a veterinary ophthalmologist about treatment options involving medication or surgery.

Breathing Issues can occur because Affenpinschers have a brachycephalic head; they can overheat and have difficulty breathing when the temperature rises. (Brachycephalic puppies have shorter airways, which gives them their squishy appearance.) This can be easily avoided by keeping a close eye on your dog over the summer. Stay in the shade, have water on hand, and stop doing anything if the dog appears to be laboring to pant. 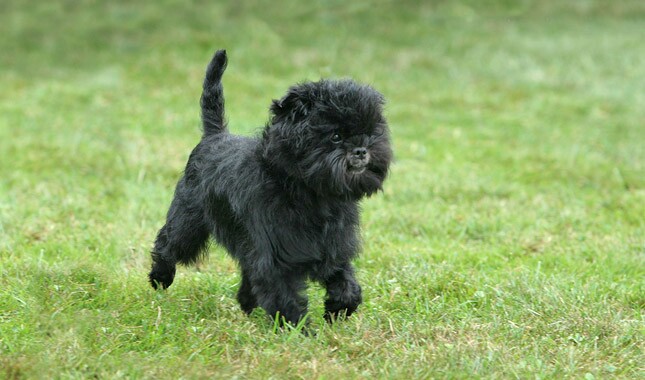 The name Affenpinscher is a good description of the breed: Affen means monkey, and Pinscher means terrier. The Affenpinscher is known in France as the "diablotin moustachu," which translates to "moustached tiny devil." The Affenpinscher's origins are unknown as one of the earliest toy breeds. Dogs that resemble Affenpinschers are frequently seen in paintings by ancient Dutch Masters from the fourteenth century, although more definitive evidence of the breed is lacking. Central Europe was awash in little terriers capable of eliminating rats by the seventeenth century.

They were employed to get rid of vermin in stables and kitchens in Germany. Lady's lapdogs were even smaller versions of these canines, able to protect the home from rats, warm their mistress' lap, and entertain the entire household with their antics. The Affenpinscher evolved from this short form, which was later developed by crosses with the Pug, German Pinscher, and German Silky Pinscher. The Affenpinscher, in turn, spawned a slew of other wire-coated toys, the most famous of which is the Brussels Griffon. The breed's popularity peaked in Germany, which might claim to be its birthplace. The AKC approved the Affenpinscher in 1936, but World War II delayed any momentum the breed had garnered in popularity. Even in its relative strongholds of America and Germany, the breed has remained relatively rare since then.

During World War II, the breeding of the Affenpinscher was halted in the United States. The breed's popularity did not reappear until the 1950s. Even though Ch Yarrow's Super Nova won the Toy Group at the nationally televised Westminster Kennel Club Show in 2002, he is still uncommon today. Among the American Kennel Club's recognized breeds and variants, the Affenpinscher is rated 125th.

Affenpinschers are little dogs with enormous characters. They are feisty, passionate, and immensely amusing. Affenpinschers make excellent home pets and enjoy being around their owners; they enjoy playing with youngsters and can fit into any household; this dog is small in size and makes an excellent companion for city people.  They don't need much exercise, are generally easy to train, and are inexpensive to feed, making them an excellent choice for a new owner. They can make wonderful family pets, but they don't do well with extremely small children and have a tendency to snap when irritated. They are, nevertheless, extremely affectionate and loyal creatures that make excellent pets for families with older children.