Norwegian forest cats are huge, affectionate felines that make wonderful family pets. They are lovingly known as "Wegies" by breed lovers. Wegies are popular worldwide, but they are especially popular in Norway, known as "Skogkatt." This breed is much larger than the usual domestic cat, and it's no wonder that they enjoy climbing because of their forest ancestry. They're frequently seen perched on the top of cabinets, enjoying the view. 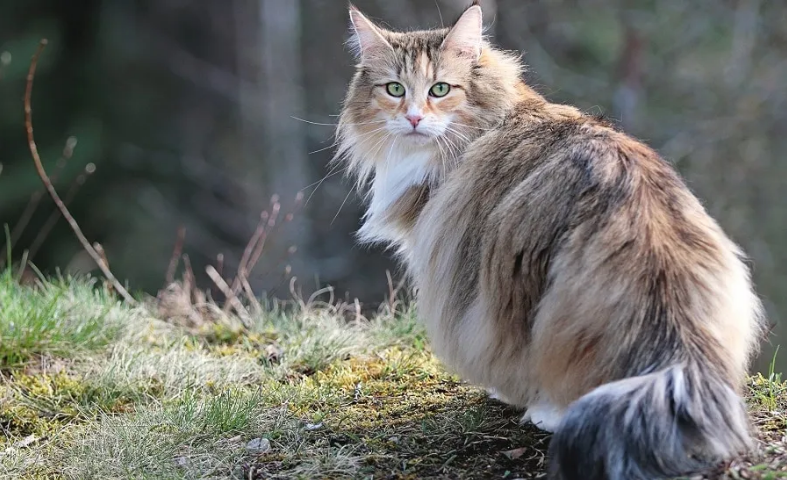 Norwegian forest cats are athletic, muscular cats with huge bodies, long, bushy tails, and a thick coat of hair that adds to their size. Their sleek, water-resistant long coats are well-suited to the hard Norwegian winters. Wegies have a dense undercoat to keep them warm, which necessitates brushing and upkeep regularly. Their coats do shed their winter undercoat will molt in the spring.

The coat of the Norwegian forest cat is available in various hues and patterns. White, black, blue, red, cream, silver, and golden are some of the coat hues. Solid, bicolor, tortoiseshell, calico, and tabby fur patterns can be found on this fluffy cat's coat. Their eyes are various colors of green, gold, copper, or a combination of the three.

The Norwegian Forest Cat is content entertaining himself if no one is home. Although he enjoys human company, he might be reserved around strangers. He's not much of a lap cat, even with his family, but a good scritch between the ears or beneath the chin is always appreciated, and he'll typically return the favor with a head butt or cheek rub. He uses classic Scandinavian restraint in his communication. Only when he needs something—say, dinner on time—does he raise his voice, and only if he is ignored.

This massive and powerful cat, unsurprisingly, is a climber. He is frequently found at the highest position he can reach in the house, and unlike some cats, he has no qualms about leaping from trees or other heights. The Wedgie enjoys fishing in a body of water for a tasty meal, thanks to his history as a wilderness and farm cat and his waterproof coat. Aquarium and koi pond occupants, beware! He enjoys being outside, yet he enjoys being alone inside the home. He also cherishes playing and thrives in the company of his adoring family. This bright, self-reliant cat has a quick learning curve but a wary temperament. 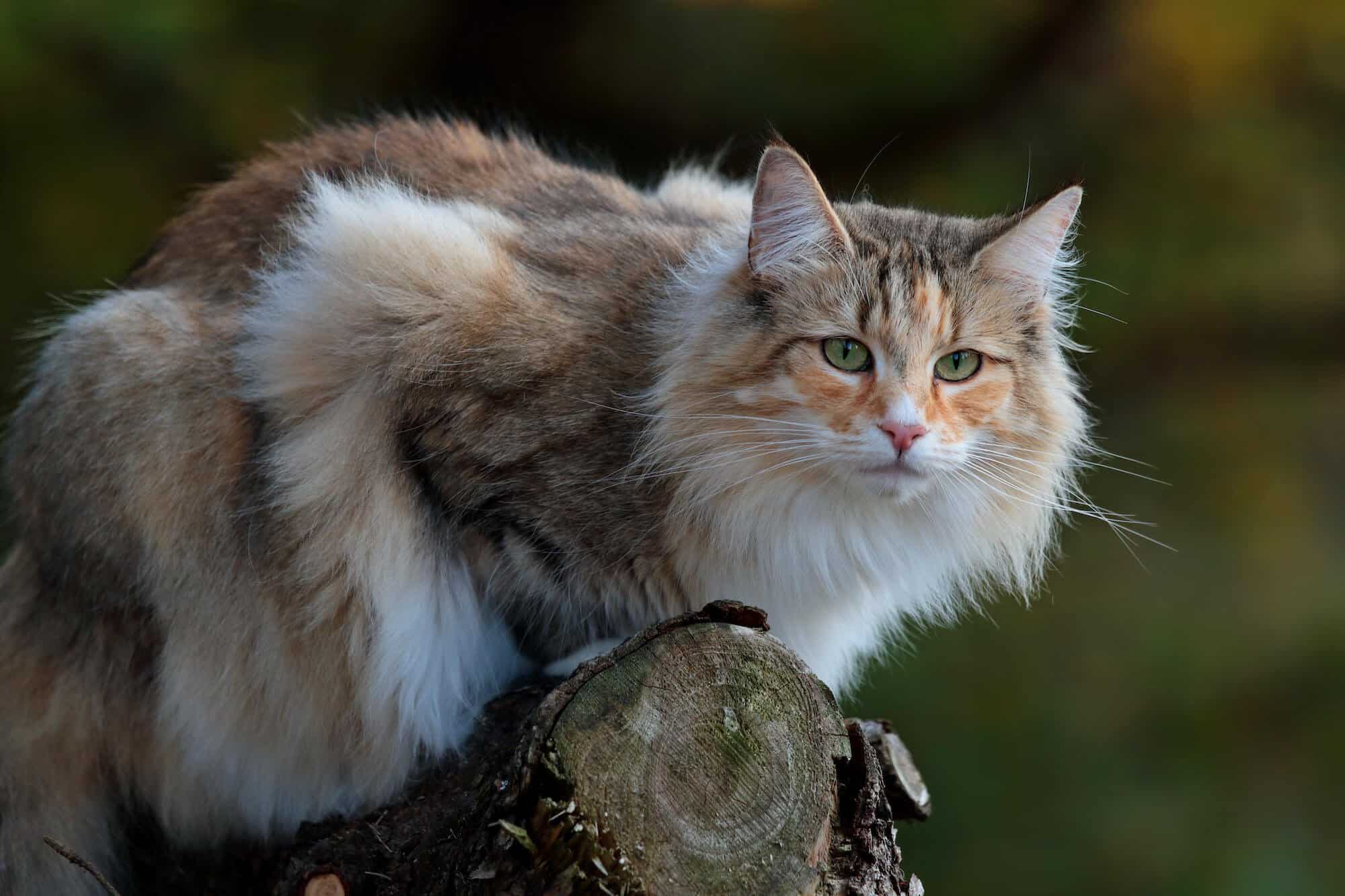 Norwegian forest cats take roughly five years to mature into full adults due to the breed's slow maturation. Owners will enjoy a lengthier kitten stage of their pet's life because their development is longer than typical. Their kittenish behavior will be expressed through a lot of play. They particularly like pouncing and practicing their hunting skills, which this breed has retained.

It would help if you gave an outlet for your Norwegian forest cat's strong hunting instincts. Get toys that look like mice or something as basic as a cat-approved feather toy, and set aside five to ten minutes every day to play with them. This allows them to hop around and burn energy while still satisfying their prey drive and is beneficial to their hunting habits. It's also a useful exercise for them.

Children and other pets tend to get along swimmingly with Norwegian forest cats. Don't let their size deter you from adopting them if you have a family with children; these cats are extremely patient and well-behaved.  This large cat breeds is not easily stressed and enjoys socializing with people of all ages.  Your Norwegian forest cat would probably do fine if left alone for brief periods due to their laid-back, undemanding disposition. However, he may develop separation anxiety if you've gone for too long because he loves you so much.

Norwegian forest cats are naturally gregarious creatures who get along with everyone in the household. Wedgies want to be friends with everyone, so you'll have to keep a close eye on them to ensure they don't go off with one of your friends.

Wedgies are particularly skilled climbers who enjoy exploring high altitudes. Because of their predatory lineage, all cats enjoy climbing and being perched high, but these cats, in particular, seem to love climbing.

Your Norwegian forest cat will inspect every bookcase, cabinet, and shelf. Consider providing your cat a tall cat tower, cat shelves, and a cat hammock so he can securely explore your home, but be prepared to find your Norwegian forest cat on whatever surface he can reach and take basic safety precautions. Cat-proof delicate vases and knickknacks, shaky shelves, and crowded cabinet tops, or your stuff will be knocked over.

These cats are heat-sensitive due to their makeup; they are designed to resist the cold Norwegian winters. Provide plenty of shade, water, air conditioning, and perhaps even a shorter haircut for your cat during hot weather. 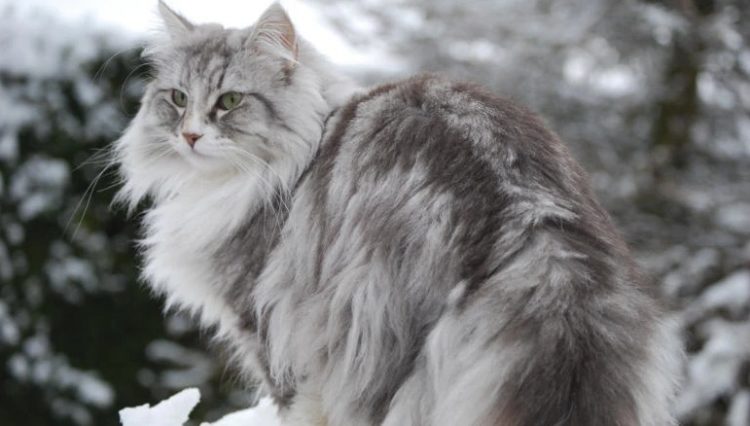 The Norwegian Forest Cat has a semi-long, water-resistant double coat that he alternates between wearing and removing depending on the weather. He has a rich, woolly undercoat, a big ruff, and a long, flowing tail that he can wrap around himself to keep warm in the winter. Only the ear tufts and tail keep their full brilliance in the summer when the downy undercoat vanishes, giving him an entirely different appearance.

When these kittens are about three months old, they develop their adult coat. This can take months, and you could start to worry whether you've obtained a mutant Wedgie with a short coat. The cat's coat does not fully mature until two years old.

The Wedgie's coat will tangle or mat if left unattended, but he doesn't require much grooming for a longhaired breed. He can get away with weekly combing or brushing, but grooming him two or three times a week will result in fewer dust bunnies and hairballs around the house. During his spring shed, you'll want to comb him more frequently.

The rest is just routine maintenance. Trim your nails as needed, which is around once a week. Check your ears once a week for redness or a bad odor that could indicate an infection. Wipe out the ears with a cotton ball moistened with a light ear cleanser prescribed by your veterinarian if they appear unclean. Regularly brush your teeth with a vet-approved pet toothpaste for good general health and fresh breath. Because the Norwegian Forest Cat is prone to periodontal disease, brushing his teeth at home and schedule veterinary cleanings as needed is essential. Brushing, nail clipping, and teeth brushing should begin early in your kitten's life so that they learn to become accustomed to it.

Any cat can acquire health problems at any moment; however, certain pedigreed cats are known to have congenital issues that can be passed down to kittens. Hypertrophic cardiomyopathy (HCM), hip dysplasia, and glycogen storage disorder type IV are common in the Norwegian forest.

The most common type of heart illness in these cats is HCM (which causes the heart muscle to thicken and decreases the heart's efficiency). Cats are less likely than dogs to have hip dysplasia (looseness of the hip joint), but some larger, heavier breeds, such as the Norwegian forest cat, are at risk. Glycogen Storage Disease IV (GSD IV) is caused by a defective enzyme and culminates in organ failure, muscle atrophy, and death. Reputable breeders keep an eye on their adult cats' health and don't breed cats with health problems. A genetic test for GSD IV is available to identify cats who are carriers. The majority of respectable breeders will also offer certain health guarantees.

Although Norwegian forest cats have a strong build, they should never grow overweight. Obesity-related health problems, such as diabetes, heart disease, and hip dysplasia, can be exacerbated by obesity, so keeping your Norwegian forest cat slim is best to avoid them. 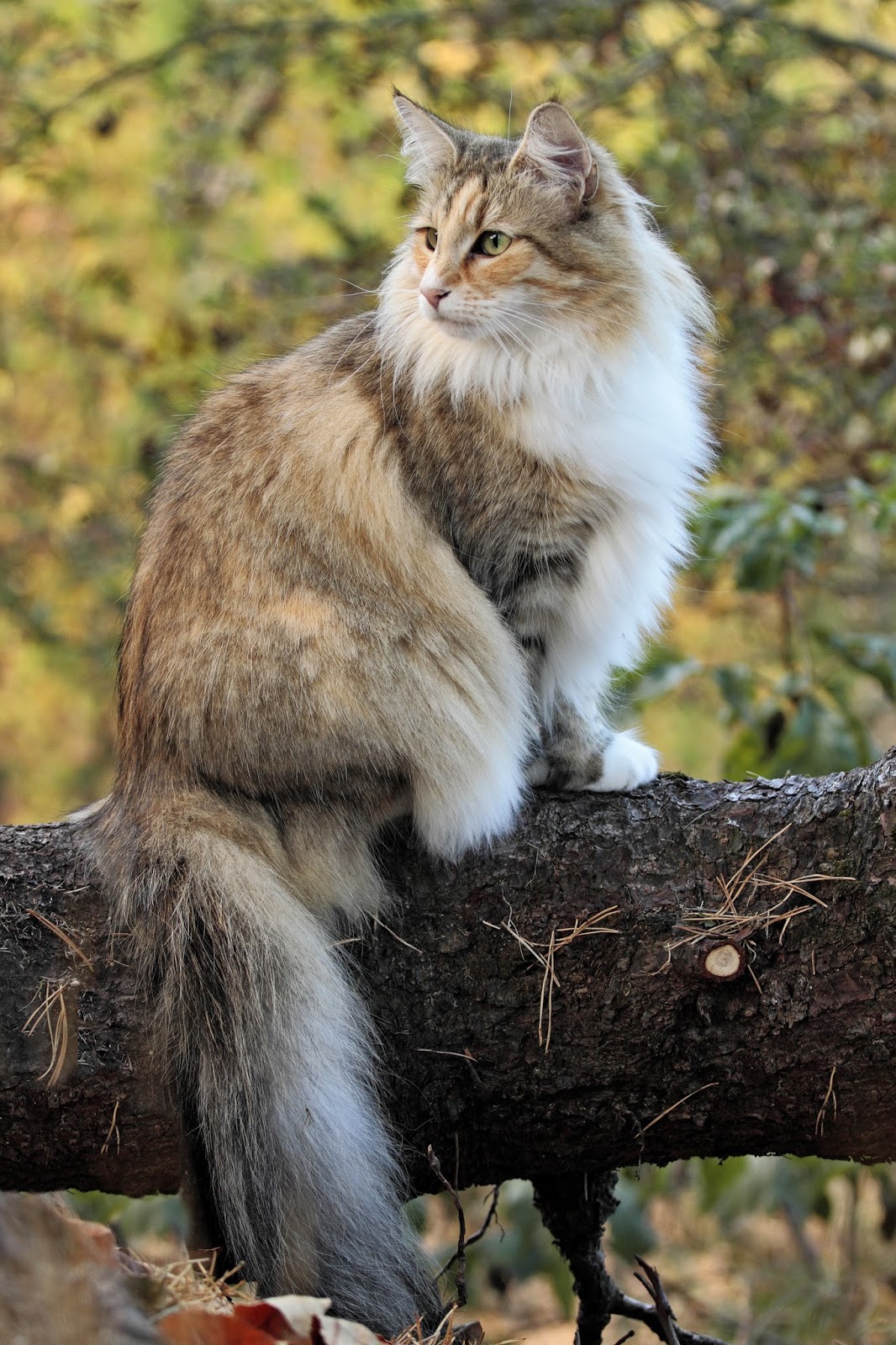 The Norwegian Forest Cat is a mythical creature that is thought to be between 1000 and 2000 years old. These were the warrior cats of the great Vikings, who served as "mousers" on their ships and farms. While the breed is certain to have originated in Norway, there are two competing claims about who its true forebears are. According to one theory, their progenitors were black and white shorthair cats imported from the United Kingdom crossed with longhaired cats brought by Crusaders.

The breed was nearly extinct by the turn of the twentieth century due to promiscuous cross-breeding with other species of cats. People took notice of the breed since it was designated as a national treasure. In 1938, Norway's King Olav V designated the Norwegian forest cat as the country's official cat breed. After decades of effort, breed enthusiasts in Norway were able to save the breed and increase its numbers through rigorous breeding processes.

The Norwegian Forest Cat is a captivating breed that will quickly become a beloved family member. They have a lot of good characteristics, like affection, cleverness, independence, and just enough sassiness to keep things interesting! You might arrive home to find your brave wegie cat looking down at you from the highest perch they can find, or you might discover that they've convinced the dog to play with their favorite toys.

Norwegian Forest Cats enjoy being the center of attention, but they're also content to entertain themselves when you're busy. When you watch your pet creeping across the backyard, their thick coats are low-maintenance and may remind you of a wild cat.