The Nebelung is a fairly new and uncommon cat breed related to the short-haired Russian Blue. Nebelungs are medium-sized breeds with a light gray coat, recognized for being mild-mannered, kind, and playful with their immediate family members. 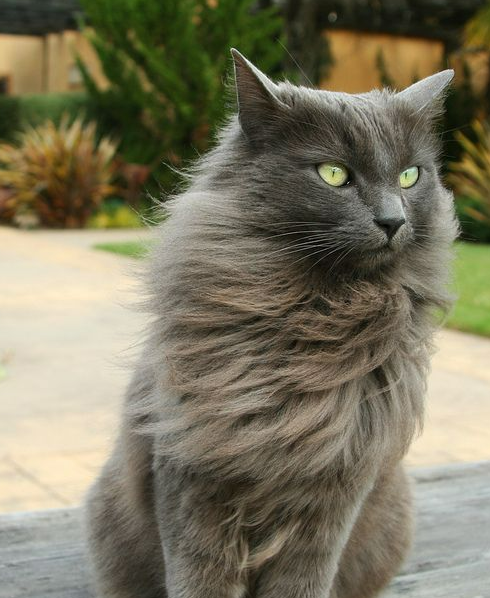 Nebelung cats are medium-sized in physical makeup and normally weigh between 7 and 15 pounds, standing 9 to 13 inches tall. Compared to shorthair Russian blue cats, one of their ancestor breeds, they are longer and larger in all dimensions, including their legs, tail, throat, and body. Size and weight differences between males and females are minimal. However, as with most cats, males can occasionally be slightly bigger, especially after neutering. Males can be distinguished from females by their frequent neck ruffs, which give them a slightly more imposing appearance.

Nebelungs have medium-sized ears and modified wedge-shaped heads. They also have long, graceful necks and torsos. Although a few cases of eyes are yellow-green, their almond-shaped eyes are generally always a vibrant green color.

The Nebelung has a medium-length, extremely velvety coat. His coat, which only comes in one shade of blue and is typically silver-tipped, especially around the head and neck, gives him a somewhat sparkly aspect. Nebelungs have a larger neck tuft of hair, which is more noticeable in males. Both men and females have tufted fur between their toes, and their tails have longer fur than their bodies.

Nebelungs owners appreciate their caring, loyal, affectionate, and sweet personalities. They make the ideal companion for family members of all ages because they are kind but playful. These sharp-witted cats form strong bonds with their owners.

These cats follow family members throughout the house because they love their owners. They only take pleasure in knowing what their people are up to and participating in the action, even if only by watching. They are lap cats who love to be handled and cuddled. The Nebelung frequently picks one or two favorite people in a family to form close bonds with.

The breed thrives in a familiar environment where it feels secure and confident. Due to their dislike of change, they take some time to become used to home moves, the addition of new family members, and other interruptions. It's crucial to shower your Nebelung with love and care during these transitions to tell them everything will be okay.

The Nebelung gets along well with other cats they can share a home with and play with. Finding a compatible cat brother or sister that your Nebelung can befriend and enjoy is frequently a smart option if they are having trouble adjusting to the recent changes.

Your Nebelung won't often be heard meowing. They are a soft-spoken breed that often only vocalizes when something is wrong in their environment, such as when their food dish is empty or the litter box needs to be cleaned.

The Nebelung often hide under a bed or maintain a safe distance when guests enter the house. Otherwise, they are quite kind and like playing with their loved ones. 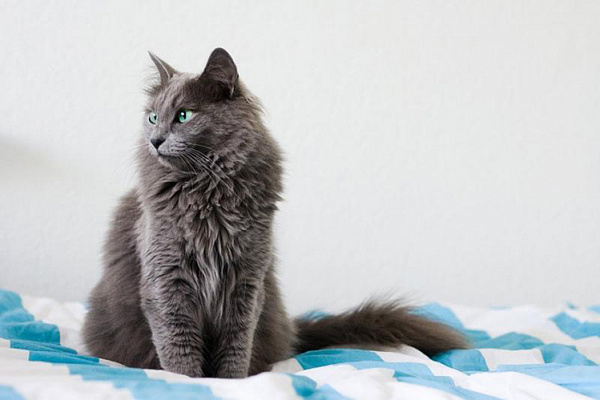 Nebelungs prefer peaceful settings and are content to be lap cats. The Nebelung will fit into your life extremely well if you have a daily defined routine because these cats prefer secure, organized environments.

Nebelungs crave solitude and consistency. They would rather be the sole pet at home and are anxious among boisterous kids.

They function best when accompanied by adults and older people. Nebelungs can coexist well with older, quieter youngsters, despite their propensity to avoid smaller children. Children are generally too unpredictable and chaotic; however, they are usually tolerant of mild children. They favor living in households without kids.

Nebelungs get along with other felines well, especially other shy breeds. However, dogs will be more challenging and need more time for introduction and socializing. Your Nebelung would likely want to live alone in the house.

Like most cats, Nebelungs require their areas to rest, unwind, and enjoy some alone time. Your cat will gravitate toward tall cat trees, elevated cat hammocks or shelves, and comfortable beds.

A Nebelung should only be kept indoors to avoid contracting illnesses from other cats, getting mauled by dogs or coyotes, and other risks that cats who venture outdoors face, like getting hit by a car. Nebelungs who venture outside also risks being taken by someone who wants to own such a stunning cat without paying for one.

To avoid periodontal disease, brush your teeth. The greatest oral hygiene is daily, but brushing is preferable to nothing, even once a week. Twice a month, trim your nails.

To get rid of any discharge, use a soft, damp cloth to wipe the corners of your eyes. To prevent the transmission of any illness, use a different towel section for each eye.

Each week, check your ears. If they appear unclean, clean them with a cotton ball or soft, damp cloth dipped in a 50/50 solution of warm water and cider vinegar. Cotton swabs shouldn't be used because they can harm the ears inner.

Maintain the Nebelung's litter box in immaculate condition. They are meticulous about bathroom hygiene, and having a tidy litter box keeps their fur looking nice.

Due to Nebelung's recent breeding and rarity, little is known about any potential health issues unique to the breed. They tend to get obese as they get older, so it will be crucial to monitor their calorie intake and use rewards sparingly. As these cats age, it is best to watch out for common feline conditions such as Feline Infectious Peritonitis (FIP) and kidney and heart disorders.

Additionally, you ought to make an effort to establish a healthy tooth hygiene practice. One of the most prevalent diseases in cats, periodontal disease, can be prevented if your Nebelung is willing to accept having their teeth brushed. 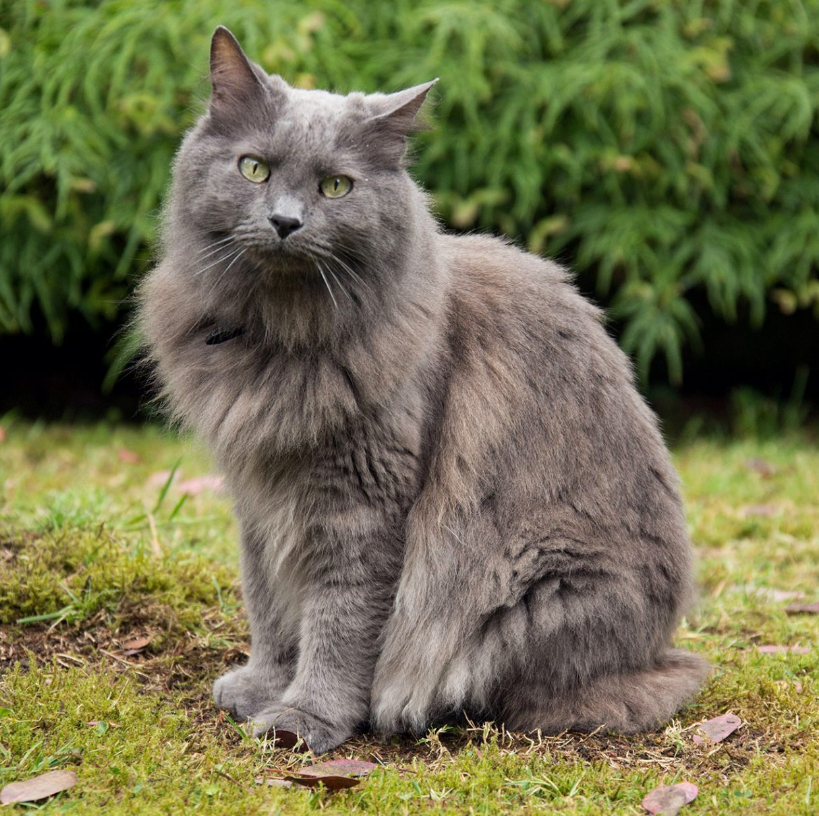 In the 1980s, Cora Cobb, a woman who owned two blue-gray cats that resembled Russian Blues but had semi-longhaired coats, created the Nebelung cat breed. The Nebelung breed was eventually founded on these cats, Siegfried and Brunhilde.

Cora Cobb put some effort into making this happen. Cobb presented a breeding standard that included all characteristics of the Russian Blue breed with the exception of coat length, thanks to the assistance of a feline geneticist for the American Cat Association named Solveig Pfleuger, who determined that Cobb's cherished pets were best classified as semi-longhaired Russian Blue cats.

The International Cat Association (TICA) altered Cobb's description in response to complaints from Russian Blue breeders. The early blue-grey cats brought from Russia starting in the 19th century would more closely resemble the standards that would be applied to the new breed, today known as the Nebelung.

The Nebelung is a stunning and fascinating breed that is still uncommon but well-liked by breed lovers. People consider the plush coat's plush hue the cherry on top. Among its greatest traits are Nebelung's loving disposition, laid-back character, intellect, and trainability.

This breed enjoys a consistent routine and will quickly pick up yours; Nebelungs require some time to adapt to changes in the home. They take time to acclimatize to changes in their habits or those of their humans; for example, if you return to work full-time after many months at home, Nebelungs could find it difficult to adjust. During times of change, giving your Nebelung lots of affection and care is crucial. Provide a compatible cat friend if you must leave a Nebelung alone for a prolonged period so that it will have company while you are away procuring cat food. Suppose you can handle this, then the Nebelung is the right cat for you!