This one-of-a-kind cat breed known as Lykoi is truly distinctive. They are great hunters, cling-on love machines, fetch players, extremely loyal, and super affectionate, and they will be beyond your wildest expectations. Lykoi is a Greek word that roughly translates to "wolf cat." This is an apt moniker for these cats, often described as feline werewolves. The Lykoi is a natural cat breed, which means it evolved without the assistance of humans–in this case, thanks to a spontaneous mutation! The Lykoi cat is thought to be half hairless. There is no genuine undercoat, and hairless body areas include the eyes, chin, nose, muzzle, and behind the ears. The exposed skin, ears, and nose have a leathery texture, and the typically pink skin may darken with contact with the sun. Most cats will molt part or all of their coat, leaving them looking even more naked than usual. This is completely natural in Lykoi cats and has nothing to do with an illness.

Lykoi cats have varying amounts of fur, some seeming virtually bald and others being entirely hairy. Although the range of colors in the naturally occurring mutation varies, breeders are actively selecting black cats.

Animals with a white coats will seem silver. In non-feline species, this combination of white and black is known as roan, and it is also used to describe these cats. They usually do so in the "all black" classes when they appear.

The haircoat is an unusual combination of melanistic (pigment less) and solid black hair. They are born completely black and develop hairlessness and a roan coat hue within a few weeks.

Males are usually larger than females, even though Lykoi is not big cats. As is typical of feral cats, their body is thin and powerful. Their tails are shorter than their bodies, and their legs are average in size compared to their bodies. Their huge, long, pointed ears add to the cat's distinctive appearance. Many people believe that this contributes greatly to these animals' "wolf look."

This cat breed is friendly and calm. The personality of the Lykoi cat allows him to get along with humans, cats, and cat-friendly dogs. Lykoi cats are normally playful; however, they do go off on their own for short periods.

Because it is protective of its toys and family, it is hesitant to share them with other pets at first. On the other hand, it mingles with them after it realizes they aren't a threat. It possesses a werewolf-like appearance as well as a hound dog-like carnivorous urge.

The Lykoi is a lively cat who enjoys being active and a highly intelligent cat who can be taught to play fetch games. If you're thinking about getting a Lykoi, ensure you have enough area and scope for climbing missions.

Thankfully, the Lykoi enjoy nothing more than cuddling up with the humans in their lives and getting some much-needed slumber after a long day of playing. 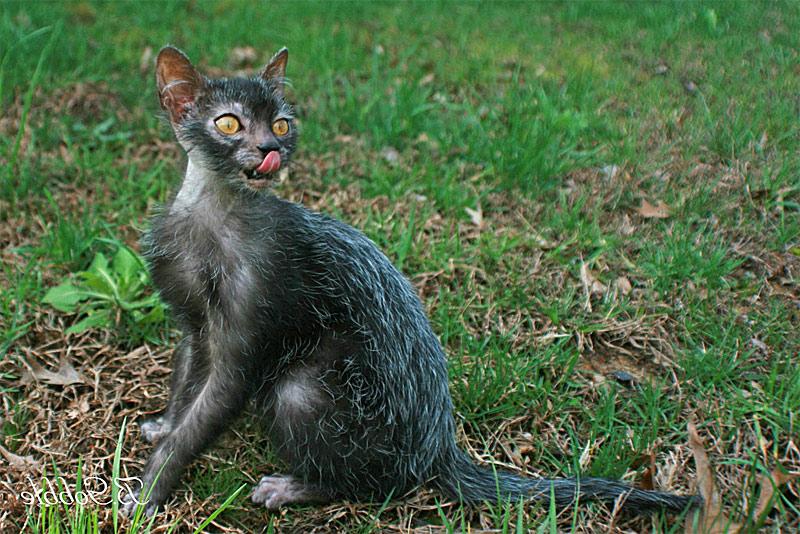 The Lykoi's light coat renders them prone to hypothermia, and sunburn becomes a major issue during the summer, emphasizing the importance of keeping your Lykoi as an indoor-only cat.

Both apartment residents and homeowners would like these cats as pets. They don't need much space, but they do need a lot of stimulation. A vast room isn't important as long as you effectively cater to their mental needs. Aside from those issues, the breed is fairly flexible. They don't climb or hide as much as other breeds, so a multi-level cat tree, a couple of scratching posts, and a few toys should suffice. Lykoi kittens are rarely an issue in multi-pet households, especially if they've been properly introduced and socialized.

Lykoi cats get along nicely with families, especially if they're socialized early on. Some people are more reticent with strangers than others. It may take some time for them to adjust to new individuals and home adjustments.

If you intend to introduce them to children, do it as soon as possible—even if you don't have any. Allowing kids to experience what it's like to be around small children will help them adjust more quickly when bringing their baby home from the hospital or visiting cousins or nephews.

Cats are excellent at getting exercise through play and the zoomies. Lykoi cats are known for their high energy levels, so you can be sure they'll receive enough exercise. You may also spend quality time with your cat and play with toys while you're away by providing interactive toys. Cat shelves and cat trees are also excellent choices!

For various reasons, Lykoi cats should never be left outside. Because of their patchy coats, they don't do well in excessive heat or cold. They're also highly curious, and as the adage goes, curiosity killed the cat.

They could wander off and become bewildered, or even worse. Even if you take them outside on a leash for supervised visits or let them relax on a screened-in porch, you should never leave them outside alone. 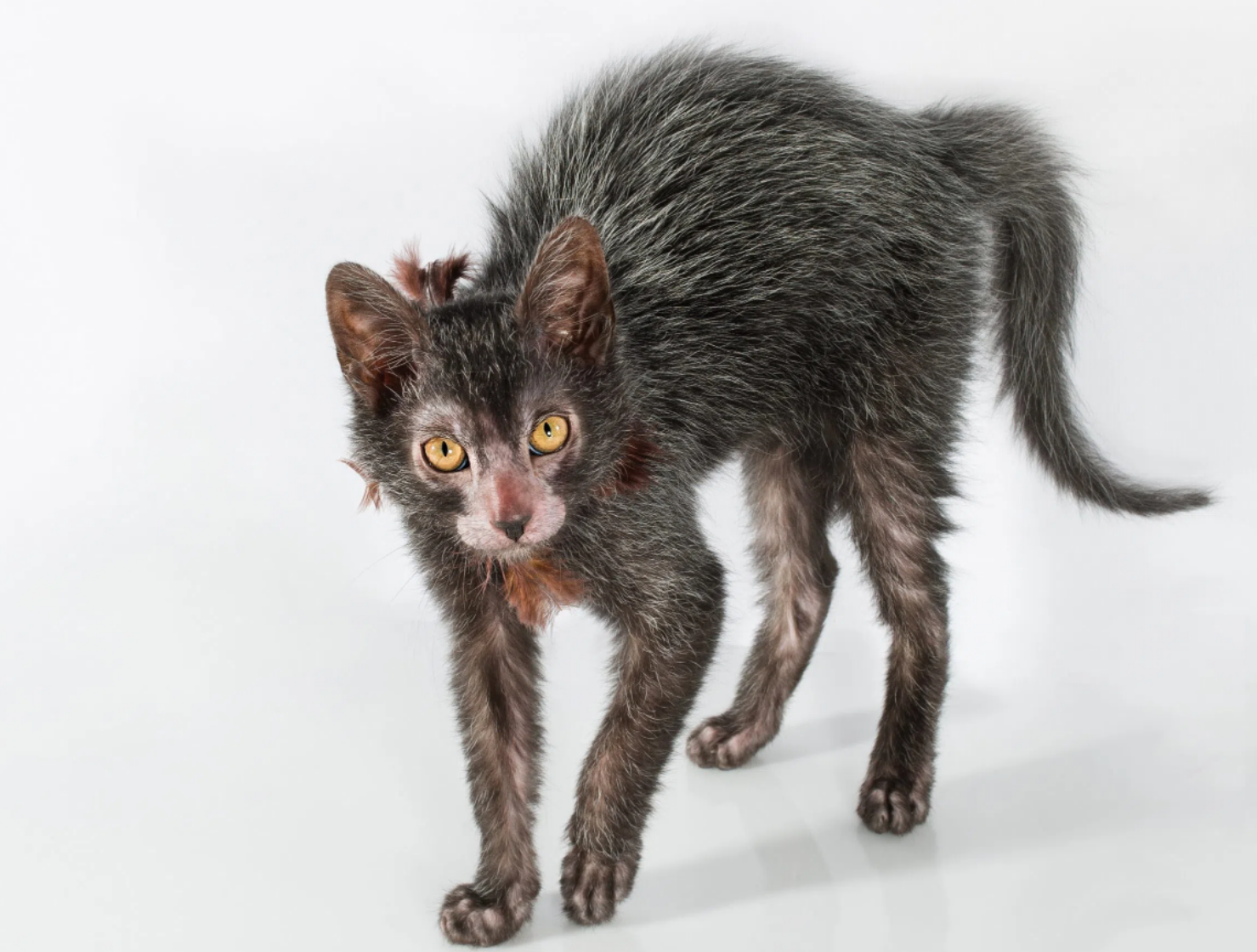 Since their hair provides little protection from the cold or direct sunlight, keeping your Lykoi out of the sun and out of the cold will help them stay healthy and happy. Aside from that, the breed is rather flexible.

Because they are short-haired, their coat only requires simple brushing twice a week during the molting season and every day during the rest of the year. Because cats clean themselves, it is not necessary to bathe them to protect their natural protective layer of skin. Their fur is remarkably silky, but it is sparse, so they require shelter from the cold and the light.

Cleaning them is only recommended when they become extremely dirty, only with dry shampoos, rags, or wipes. Once you bathe them with shampoo, they must be designed specifically for cats and never for humans or other animals. And Because some cats have excess oil in their ears and on their nails, you should regularly wipe these areas with a towel. They should only be kept as house cats.

Although the Lykoi has no breed-specific health issues, you should always look for signs that your cat is in distress or pain. It's also worth noting that accurate longevity forecasts are unavailable due to the breed's recent history. So, it's always a good idea to arrange frequent wellness appointments with your cat's veterinarian.

Also, Lykois may experience the same problems as any other domestic cat; they may contract some of the most frequent feline ailments.

Skin disorders are the only confirmed issue that appears in Lykoi. They are also prone to sunburn and skin discoloration due to excessive sun exposure. If their skin isn't properly cared for and cleaned, the greasy residue can cause skin issues. This can cause issues with their ears and toes.

Lykois must be kept indoors exclusively because they are sensitive to harsh weather. They lack an undercoat, particularly if they are nearly or entirely bald. If you live in a cold climate, your Lykoi will require a comfortable sleeping environment, such as a heated bed. 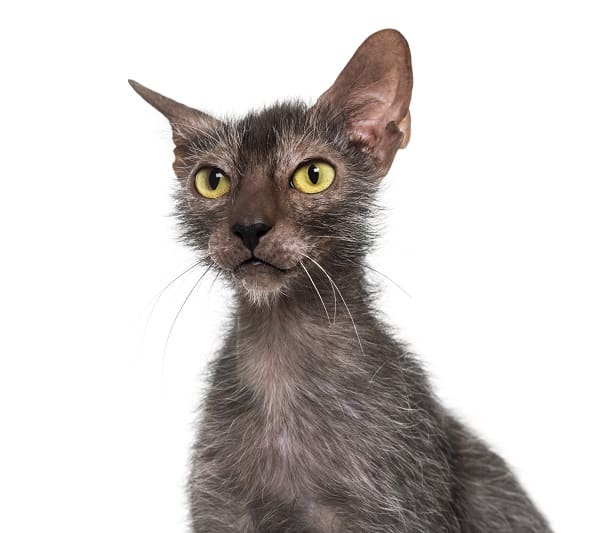 The Lykoi's distinctive look results from a naturally occurring mutation in shorthair cats. In 2010, two sets of kittens with the mutation were discovered, one in Virginia and the other in Tennessee. Dr. Johnny Gobble, a veterinarian, conducted a battery of genetic and medical testing on the kittens to ensure they were healthy, shared the same coat gene, and were not connected to the Sphynx or Devon Rex breeds. Dr. Gobble was enthralled by the kitties and began breeding them in 2011 with his wife, Brittney. The International Cat Association presently recognizes them as an "experimental breed," while the Cat Fanciers' Association granted them Misc Status in 2018.

The Lykoi cat is playful and energetic, and curious by nature, yet it also has a peaceful demeanor. It has a warm personality and appreciates the attention of its humans. They enjoy playing fetch and are curious, bright, and adept hunters. They thrive in social situations and build deep ties with their owners. Initially, they may be wary of new people and pets. And these affectionate felines make wonderful companions. Except for the charming werewolf appearance, they look like any other housecat.