Puppies Are Born With The Ability To Communicate With People.

Puppies' ability to follow a seemingly simple gesture places them in uncommon air in the animal kingdom. Even our closest evolutionary relatives, chimpanzees, may not grasp pointing as well as dogs.

For decades, scientists have argued whether dogs learn to interpret pointing from people or are born with the skill.

New research in Current Biology shows that even 8-week-old puppies with little human exposure can understand pointing and excellent social cognition in other tests. The study also discovered that a pup's genetic composition influenced its capacity to follow a pointed finger to a hidden goodie and its willingness to pay attention to human faces.

The study's lead author, Emily E. Bray, a University of Arizona animal behavior psychologist, claims these canine cognitive accomplishments are heritable, like human intellect. So, dogs are biologically ready to communicate with humans, she argues.

Finding a genetic basis for social intelligence in dogs could help breed better assistance dogs that can read human cues, says research co-author and comparative psychologist Evan MacLean of the University of Arizona.

The study's authors had two key questions. The first was to see if young puppies who had not yet spent much time with humans were responsive to human communication. The second was if the puppies' social intelligence was inherited. 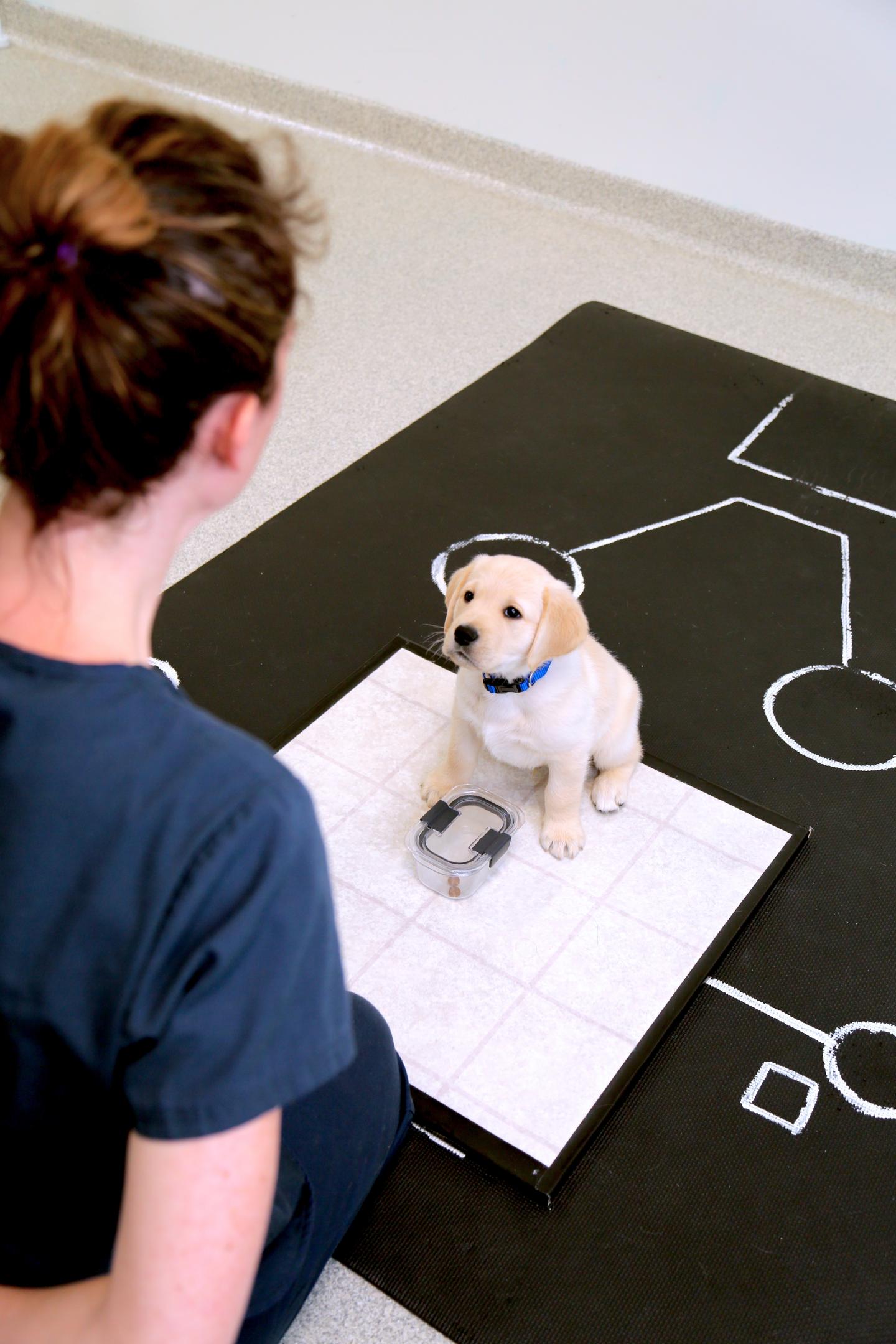 They began testing 375 eight- to ten-week-old Labrador and golden retriever puppies from Canine Companions for Independence, a nonprofit that breeds service dogs for people with disabilities or PTSD. Canine Companions also retain detailed information on each dog's pedigree dating back decades, which aided the genetic analysis.

The puppies had spent practically every day with their mother or littermates by this age. This made the puppies ideal test subjects for determining whether dogs' social cognition was learned or innate. But scientists did not always love working with puppies on a more practical basis.

The first two challenges tested the puppies' understanding of human gestures. The scientists hid a treat under one of two upside-down cups. When the researcher exposed the cups, they either pointed at the food-hiding cup or showed the puppy a small yellow cube put in front of the reward-hiding cup.

It's a pleasure to work with them, says MacLean. But they're puppies, and they pee and poop on everything. Puppies! I said at the start of the project. Then it was Puppies at the end.

The researchers put the young canines through a series of four exercises to assess their social cognition.

In both tasks, the puppies got to the proper cup 67% of the time, compared to 50% if chance alone was responsible for the correct replies.

The researchers also conducted an "odor control" test that contained no pointing to ensure the pups weren't just following their noses. The canines only got 49% of their answers right in this test, indicating the human gestures helped them improve in the other trials.

MacLean claims that the puppies could mimic human gestures despite being only eight weeks old. Moreover, each furry test subject had to pick up a cup up to 12 times, and their accuracy didn't increase with practice. This problem is being solved above chance from the first exposure, and it isn't getting better over time, says MacLean. That means they don't need to learn it.

A third activity had an experimenter repeat a 30-second script in a high-pitched voice comparable to baby talk while gazing down at the dog. The experimenter's face received an average of six seconds of attention. Adult dogs tend to make more significant eye contact with humans, suggesting they become more attuned to human faces with age.

The fourth and final test was the "unsolvable task." Researchers gave puppies increasingly difficult-to-access snacks in a plastic container in this experiment. The researchers eventually made it impossible to get the food out to observe if the puppy would seek assistance from a nearby human, as seen in adult dogs. It appears that puppies don't naturally seek us for support but rather adopt such behavior when they interact with our species more. Interact with our species more.

The findings from these four activities were combined with detailed pedigree information provided by Canine Companions. Their family tree gave a better statistical explanation for each dog's performance than othercharacteristics, including breed, sex, age, and region of upbringing.

The article found that a puppy's communication skills and tendency to gaze at a human face during the 30-second script was significantly heritable.  More than 40% of performance variation was hereditary.

Around 40% heritability is incredible, says Bridgett vonHoldt, a Princeton geneticist studying dogs and wolves who was not involved in the work. In well-studied species like pigs and red squirrels, behavioral heritability is in the 20s or 30s, and 40 is extraordinarily high for a complicated character like interpreting social cues.

The other two activities had substantially lower heritability, indicating that not all qualities have a large genetic component, according to MacLean. A adult pointing to hidden food is observed by an 8-week-old yellow retriever puppy. (Canine Companions for Independence)

This isn't the first study to indicate that human social cues like pointing may be inherited. But, according to Monique Udell, an Oregon State University psychologist who studied human-animal interactions and wasn't involved in the study, this is the first study to show that these traits may be acquired genetically in large groups of dogs with known levels of relatedness.

Following human social cues was likely a significant skill selected for during canine domestication, according to non-author Zachary Silver, a comparative psychologist at Yale University. However, these data don't tell us the cognitive or genetic pathways.

Bray and her co-authors are currently working on a second genomic analysis of Canine   Companions dogs to look for genes linked to the same social cognition investigated in the current publication.

Identifying the genetic foundation of this social skillset in dogs could one day help us breed more successful assistance dogs, says MacLean. He argues that knowing which canines will excel in these positions could save resources and people.

When you share your home with dogs, especially a young puppy, you rapidly discover how quickly each room becomes one huge chew toy and how much mess i...

Dogs fill your life with love and joy but also need you to keep them healthy. It would be best if you assumed responsibility for your dog's health as ...

Read More
March 15, 2022Dogs
According to a survey, dogs appear to be truly saddened by the loss of their canine companions.

The loss of a beloved canine companion is heartbreaking, and recent research suggests that you are not alone. Any other canines in your household may ...

While coconut oil isn't a cure-all for dogs, and there are risks associated with using too much of it, it may benefit your dog's skin, hair, digestion...