How To Exercise Your Pet During Cold Weather

﻿﻿﻿﻿﻿﻿﻿﻿﻿﻿﻿﻿﻿﻿﻿﻿﻿﻿﻿﻿﻿﻿﻿﻿﻿﻿﻿﻿﻿﻿﻿﻿﻿﻿﻿Rainy, windy, or chilly weather is unlikely to attract pet owners to take their pets outside to play. This is particularly true if your pet is small, prone to rolling in muck, readily persuaded to drink puddles on the ground, or difficult to call back once off the leash.

No one can blame you for staying indoors with your pet on rainy days, but it doesn't prevent you from meeting your pet's daily exercise requirements. Animals are similar to humans. Obesity and other linked health problems are more likely if they do not get adequate physical activity in their daily routine.

In terms of exercise requirements, each animal is unique. Their usual food diet, the number of treats they eat, breed, age, metabolism, and genetics can all influence how much activity they require. When it's too chilly to exercise your pet, try one of the following options to keep them active and fit.

Consider the last time you used the jump rope or went to the gym to do some squats. Because these exercises target your leg and core muscles, they need a lot of energy. The same holds for your dog. You can tire out their legs by enticing them to jump for a toy or over object portions that are tired lead to laying down on the couch or in bed. The next thing you know, you've got a sleeping dog who got a good workout and was rewarded for it.

Other games include fetch, tug-of-war, and others.

Traditional sports that were initially only played outside during the summer months can now be enjoyed indoors. To organize a game of fetch, use a straight corridor or the stairs. Purchase a couple of heavy-duty rope toys and attempt to wrestle them away from your dog. Teaser toys with something dangling or jingling at the end are popular among cats. They'll also cheerfully climb cat trees that fit neatly in a room's corner.

Do you have a daring dog that doesn't get tired quickly? This winter, your treadmill could be the instrument that saves your life. To teach your pet how to use the machine, you may need to set some treats on the track and start them at a modest speed. You'll be able to keep your pet in shape during the colder months after they get the hang of it, and you'll have a fantastic party trick to show your friends when they come to visit you. 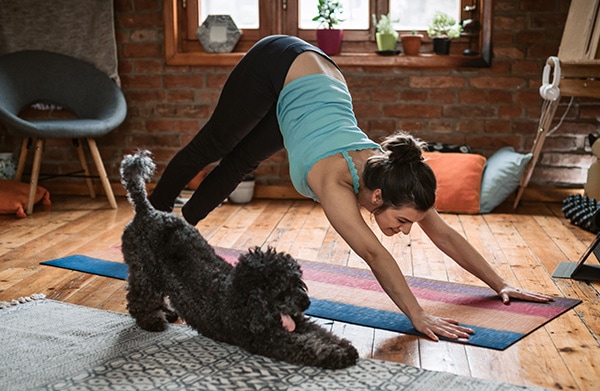 Choose some high-value treats that your pet won't turn down and toss them around the room in different directions. Running and changing directions will exhaust them, and even animals who aren't good at fetch will keep going until they can no longer stand.

Animals that aren't mentally stimulated enough will behave out in other ways. Some will bark, others will beg their owners to play, while others will be destructive. Don't underestimate the importance of mental stimulation for your pet. It will exhaust them just as much as physical activity (but mental exercise should not substitute physical exercise).

You may keep your pet's brain active by teaching them tricks, giving them puzzle toys, playing hide-and-seek, or making an obstacle course out of household items.

Play a game of hide and seek

Tell your dog to go hide in a room, then call them. Your dog utilizes all of his senses to track you down, and when they do, they'll bring you further joy. Just be careful not to become too thrilled and reveal your secret hideaway too soon.

You may make them earn their reward by hiding their goodies throughout the house, which will help them exercise and keep them cognitively busy. There are also a variety of interactive toys available that will keep their mind and body stimulated. 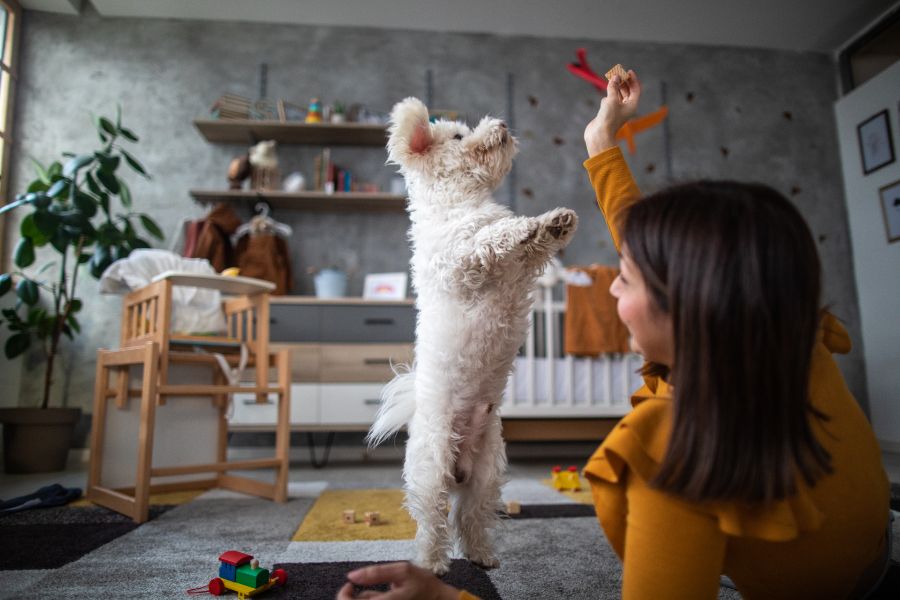 Lack of exercise is linked to a variety of health issues.

The number on the scale will not change whether you skip a day or even a week of exercise due to bad weather. On the other hand, their health is jeopardized by their persistent laziness. Even when the weather grows warmer, an animal that has become accustomed to a routine without action will learn to stick to it. To keep them physically healthy on the outside and inside, they must sustain high activity levels throughout the year.

According to recent studies, nearly half of all dogs in the United States are overweight or obese. Obese pets may appear charming, but the consequences of obesity are anything but. Diabetes, a slowed metabolism, arthritis, heart disease, skin disease, liver illness, and a reduced immune system are just a few of the harmful impacts. Obesity also raises the risk of difficulties during anesthesia, which is frequently used for surgeries and dental procedures. Overweight pets are also more prone to develop cancer because fatty tissue provides a favorable environment for malignant cells to thrive.

There will be pauses in the weather unless you're in the thick of a snowstorm that will allow you to spend some time outside. Take advantage of those opportunities to get some exercise in your yard or go for a brisk walk. Some pets will refuse to go out in the colder weather, which is a clear warning that you should set up a potty area near the house and commit to indoor activities until the weather warms up again.﻿

Read More
October 19, 2022Dogs
How to Have a Stress-Free and Simple Dog Camping Experience

You might think it's a good idea to take your dog camping if you spend a lot of time outside. The good news is that most dogs would be thrilled to go ...

Toys are crucial to your dog's well-being, whether you're playing fetch with him or just watching him roll around for amusement. Choosing toys for yo...